I spent the years 2019-2020 deeply immersed in migrant justice work in NorthEast Ohio for different organizations and conducting sustained research on border imperialism, the criminalization of migration, immigration detention, and the dismantling of humanitarian protections for people seeking asylum at the U.S.-Mexico border. Witnessing the crushing magnitude and violence of immigration enforcement was intertwined at that time with personal anxieties related to my precarious immigration status in transition, which enabled me to reflect on how I am positioned in the system and the degrees of insecurity and privilege I experienced. This culminated with a series of literary essays, a number of reports on immigration enforcement, and a series of political education workshops. Selections from these intertwined projects are detailed below.

My examination of U.S. immigration detention included court monitoring at the Cleveland immigration court and observing deportation proceedings for a report put together by a migrant legal defense organization. Witnessing the ways in which bureaucracy is weaponized and used to gratuitously punish and entrap people in an impossible labyrinthine system with no likely exit but deportation led to my writing this personal essay. This is a performance of the essay I delivered for the 2020 Tint Journal Literary Festival, Tinted Tales. You can read the essay here.

This report argues that US immigration enforcement is deeply rooted in the logic of border imperialism and racial capitalism in both policy and public discourse terms, as evidenced by its histories of exclusion and mobility control that predominantly discriminate against poor immigrants of color, the systematic criminalization of migration, and the dehumanization of migrants through incarceration. Following the work of Harsha Walia, this report examines how border enforcement is a product of the manner in which the state has historically controlled migrant labor, through the conditional admission of temporary workers or highly-skilled immigrants, and the exclusion of poor immigrants, refugees, and asylum seekers deemed unproductive and, thus, “a financial burden” on the state. While migrant mobility is deeply restricted, U.S.-controlled free trade agreements such as the 1994 North American Free Trade Agreement (NAFTA) and the 2005 Central American-Dominican Republic Free Trade Agreement (CAFTA-DR) have eliminated barriers for the movement of investment capital, property rights, and commodities in the region. These neoliberal policies have led to the destabilization and displacement of vast communities in Mexico and Central America, particularly of campesinos and Indigenous people, some of whom have been internally displaced and some of whom have been forced to migrate northwards and across the US-Mexico border in order to survive. The US military-prison-industrial complex and its zero-tolerance policing tactics have produced the disproportionate criminalization and incarceration of Black, Latinx, Indigenous people, and migrants domestically, but these practices have also transformed societies abroad through outright war and occupation, or through the exportation of security regimes to other regions of the world. These relations of social, economic, and political exploitation are sustained by transnational security regimes that thrive on the militarization of every day life and the expansion of the infrastructures of securitization and containment, including militarized borders, prisons and detention centers, and the criminalization and incarceration of the marginalized. Finally, this report offers an analysis of the dismantling of the asylum system in the past four years from the point of view of its human rights abuses by contextualizing the recent treatment of Central American asylum seekers in relation to broader histories of border imperialism, racialized exclusion, and the criminalization of immigrants.

IMMIGRATION 101, an online community-outreach workshop for the InterReligious Task Force on Central America and Colombia (October–November, 2020). 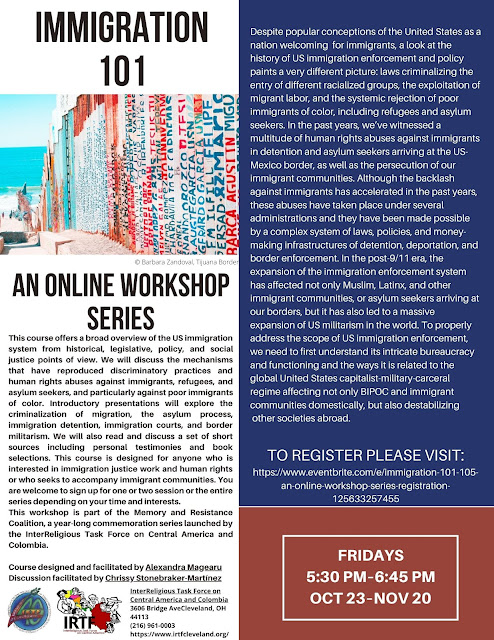 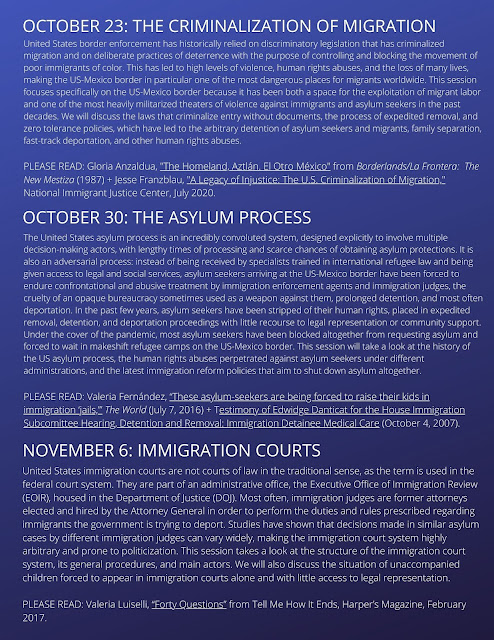 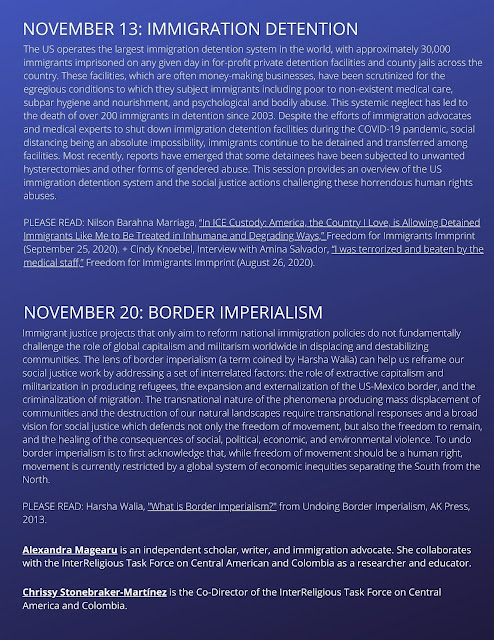 The Morrow County Sheriff’s Office failed to follow its own Infectious Disease Control Program (IDCP), required by the State of Ohio, as well as Immigration and Customs Enforcement (ICE) National Detention Standards (NDS), required under the federal contract. These mistakes led the Morrow County Correctional Facility to become the first county jail in Ohio, and the first ICE detention center in the United States, to allow every inmate to be infected with COVID-19.

This report outlines numerous examples where the jail violated its own written IDCP and the federal NDS. These failures, both systemic and deliberate, led directly to the jail’s massive infection rate and the death of Oscar Lopez Acosta, a Dayton father detained at the Morrow County Jail for civil immigration reasons.